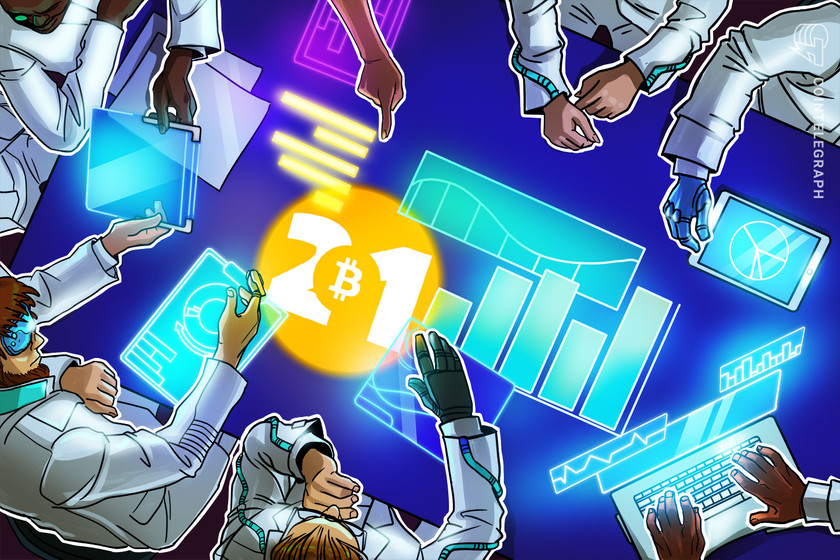 Layer-2, DEX liquidity pool position vaults, and insurance is on the horizon for the rapidly-expanding team.

Two sweltering blocks from the gated entrance of Bitcoin Miami I managed to track down a core contributor for one of the most important projects in decentralized finance (DeFi). Flanked on all sides by clueless Bitcoiners, pseudonymous Yearn Finance vault security specialist “Doggy B” chatted with Cointelegraph about the future of the yield vault protocol, as well as an as-yet unannounced project Doggy was in town to fundraise for — the anoles scurrying by our feet just as oblivious to the alpha being leaked as the maxis chatting about Tony Hawk and Floyd Mayweather.

Describing without doxxing is a delicate exercise, but here goes: think a late Che Guevara beard, Unibomber sunglasses, and everything else giving off a pragmatically nondescript, “undercover FBI agent” vibe — except, of course, the pleasant and amiable demeanor.

In the 25 minutes it took to get through the gate, Doggy broke down protocol expansion, new products, and Yearn’s unique brainpower moat — all of which points to steady growth for a project that’s been firing on all cylinders as of late.

As with many DeFi protocols, layer-2 has been a focus for Yearn’s developers and vault strategists.

“A lot of the strategists have been playing with sidechains, re-deploying vaults on sidechains,” Doggy told Cointelegraph. “The vault would still be on ETH, but it would source liquidity via a bridge from the sidechain.”

The only barrier left is that the bridges between chains can often be “flaky,” as Doggy put it — taking hours or even days to process, making traders and developers antsy. In the end, he thinks that rollup solutions are where the space will largely migrate.

“I see it as practice for more ‘intense’ layer-twos like Optimism and ZK-sync. Hopefully that’s where Ethereum is going long-term.”

He also shared that vaults are in the works that utilize decentralized exchange liquidity pool positions, a long-awaited product fraught with complications.

“We’ve been working for a while to try and get DEX strategies to work, because you have to deal with impermanent loss,” he said.

The difficulty with these positions is in limiting downside from impermanent loss, especially at times of market volatility. Options derivatives for hedging positions was one strategy initially tested, but decentralized option platforms largely lack liquidity and the pricing makes it an impractical solution.

The current working model is using liquidity from two vaults — say, ETH and WBTC — and combining them to create a DEX pool position as part of the underlying vault strategies, he said.

Regardless of the exact method, finding a workable DEX strategy is a priority given its one of the few sectors Yearn has yet to explore.

“Obviously it’s an order of magnitude more complex, but DEXes are the only vertical where it’s billions of dollars that we haven’t tapped yet.”

Aside from expanding the functionality of the vaults, Yearn joins multiple other teams in exploring new verticals and products. While the market continues to reel from a 50% drawdown across the board, DeFi protocols are shipping at alarming speed, with Sushiswap, 1inch, and Aave expanding to new chains and protocols.

However, it remains an open question as to how projects best expand from a tokeneconomic standpoint. Synthetix, for instance, is planning four new protocols which will each feature their own new token.

Doggy said the Yearn team is more conservative with the money printer.

He pointed towards Keep3r as an example where the project called for a new token, and teased that the team might mint one for Yearn’s forthcoming insurance offering, though the decision is still being discussed internally and Doggy’s sense is that they won’t — after all, a new product could also drive value for the YFI token.

“There’s something to be said for Aave, where their token is an insurance backstop for the money market. That could drive YFI usage, drive value for YFI, without just printing new tokens. […] Andre has made some stuff, and we’re waiting for it to be production-ready.”

After the dissolution of a merger with insurance/coverage protocol Cover, Yearn has been in need of an insurance solution — along with the rest of the market. Despite users frequently requesting more coverage solutions, few products have managed to take off. The largest is Nexus with a half billion in TVL, and they may soon grow larger via a dissolution of their legal entity and a need for KYC burdens.

Doggy declined to give a guesstimate on the timeframe for when Yearn’s insurance product would launch.

“Could be in a few months, could be tomorrow,” he joked.

The protocol is growing rapidly, with March serving as a banner month as the vaults brought in $4.88 million in revenues. Likewise, per DefiLlama vault TVL looks to be entering parabolic growth, eclipsing $4.3 billion and placing the protocol in the top-10 by size.

However, the metric Doggy pointed to was hiring. The team currently sits at 35 people amid a spree of new additions, with more coming on “every day.”

He noted that raw human talent is especially important for a protocol which sees a new fork on a near-monthly basis — in fact, it’s what will keep them competitive in the long run.

“Code is free, brains are not.”