The cryptocurrency market has recovered after its mid-week selloff. Having fallen to a total value of $1.2 trillion, it now stands at roughly $1.38 trillion. This represents a rise of nearly 15% in a few days, with certain altcoins (ETH, DOGE, XLM) leading the charge. With most major cryptocurrencies rebounding healthily, it looks like the market could have a strong weekend. As such, we’ve picked the the top 5 cryptocurrency to buy for weekend rally. This mostly covers coins with good prospects for a short-term rally.

Axie infinity (AXS) is one of the few major coins right now performing consistently well. In fact, it broke its all-time high only a few hours before writing, reaching $32.19. It has since retraced down to $30.78. However, even this price represens a 30% increase over the past 24 hours, as well as a 30% increase in the past week. Even more impressively, it’s up by 150% in the past fortnight and by 850% in the past month. 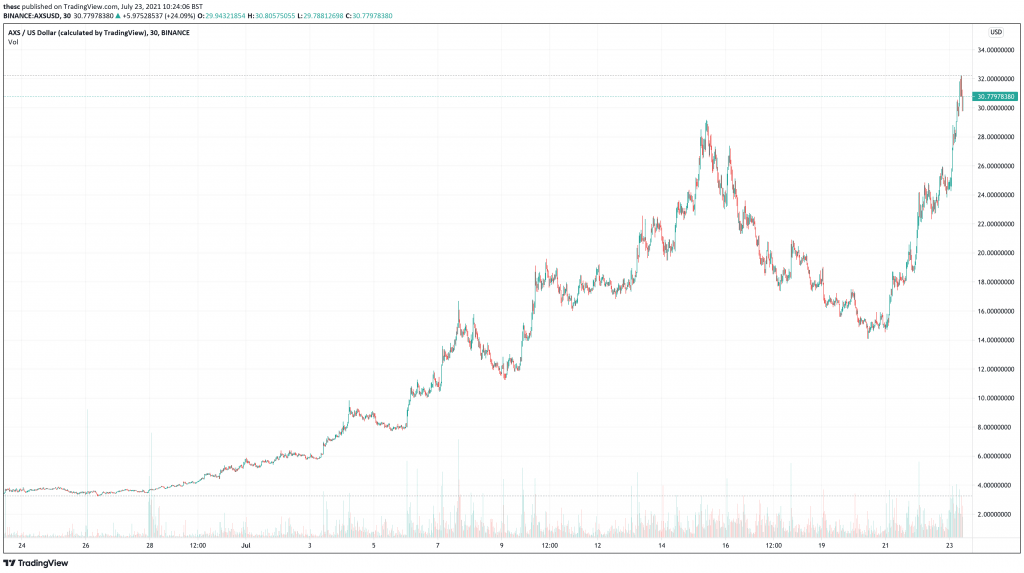 Almost needless to say, this makes AXS the best-performing coin over the past month. And there’s a good chance its rally could continue over the weekend and beyond. For those who aren’t familiar with it, it’s the governance token for the decentralised Axie Infinity online video game. It lets holders vote for game changes, trade game creatures, and can be staked to earn rewards.

At the start of this month, the game’s makers revealed that it had passed 350,000 daily active users. It had only 100,000 at the beginning of June, highlighting just how quickly it’s growing.

Since falling to a seven-day low of $29,500 on Tuesday, bitcoin (BTC) has risen to just over $32,500. This is a 10% rise in three days. While this isn’t as strong a bounce as that enjoyed by some altcoins, bitcoin also didn’t fall as hard. This makes it a safer bet than many other cryptocurrencies, while it still offers significant upside. 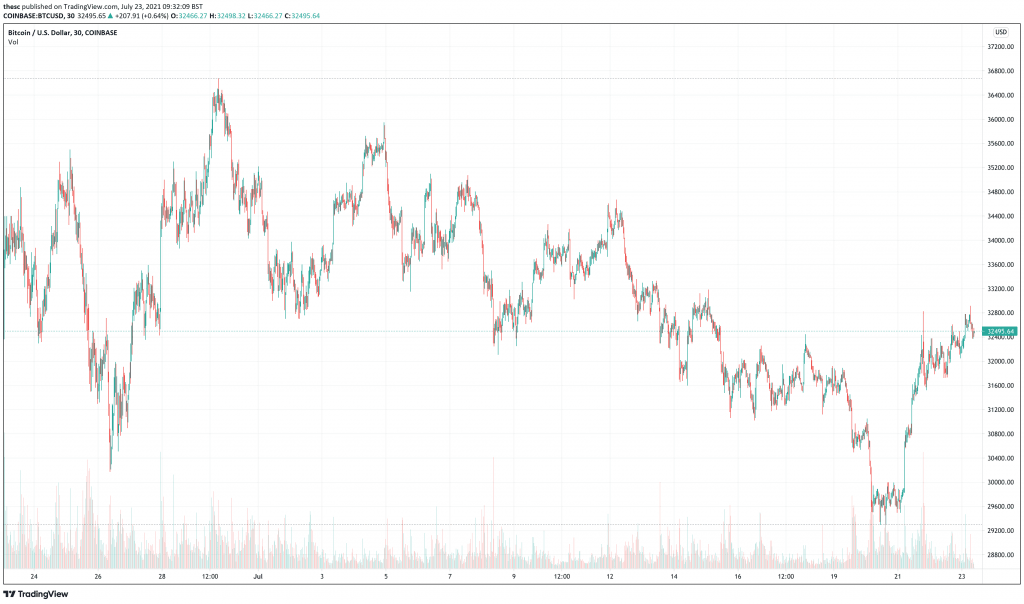 However, while these percentages aren’t great, the simple fact is that, if there’s going to be a rally this weekend, bitcoin will be involved. It almost always leads market surges (and falls), with the rest of the market seemingly unable to do anything with BTC doing it first.

Aside from that, the prevailing opinion among analysts is that bitcoin is undervalued. A recent survey of researchers and industry figures found that 61% of ‘experts’ believe it’s currently underpriced. It also arrived at an average end-of-year price prediction of just over $66,000.

Price models are even more bullish than this, with the stock-to-flow and 11-year exponential trend both suggesting a closing price in excess of $100,000 for 2021. This is why bitcoin one of the top 5 cryptocurrency to buy for weekend rally, since it’s likely due a big rise at some point. 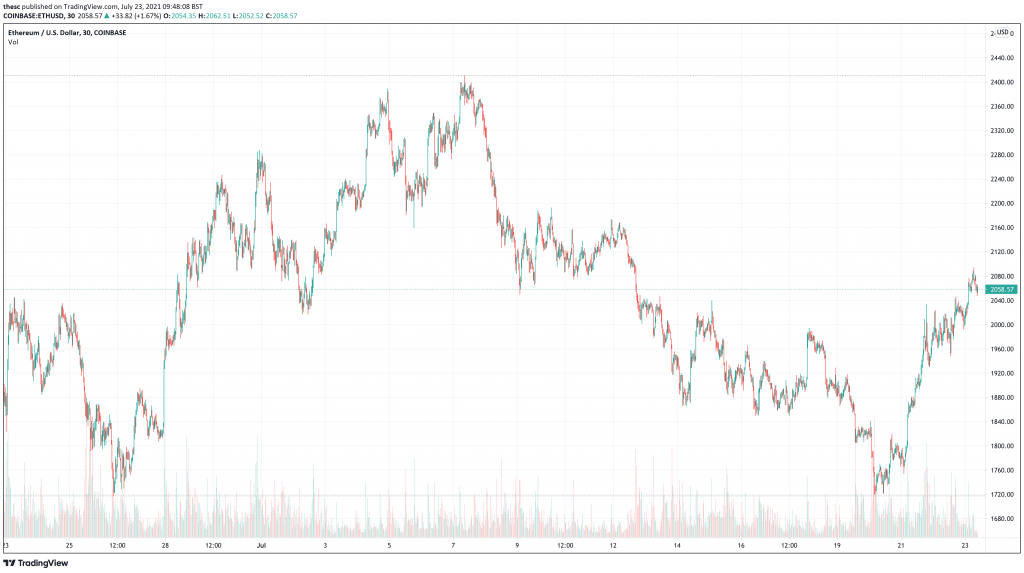 Ethereum is the fifteenth best-performing top-50 coin over the past 30 days. Despite not being one of the very best performers, there’s a good chance of it rallying big in the not-too distant future. It will rollout its much-awaited upgrade EIP-1559 on August 4. This aims to make Ethereum’s fee system fair and more efficient, while it will also initiate the burning of a portion of fees. The latter change could potentially squeeze the supply of ETH, making it more valuable (assuming equal or increased demand).

At the same time, the gradual, phased rollout of Ethereum 2.0 continues. Deposits into Ethereum 2.0’s smart contract are still rising steadily, hitting 6.38 million ETH and further reducing circulating supply. While the exact date of its public launch isn’t yet known, the completion of EIP-1559 should allow the Ethereum development community to concentrate their efforts on getting it up and running.

Needless to say, staking will greatly increase demand for ETH while reducing supply. 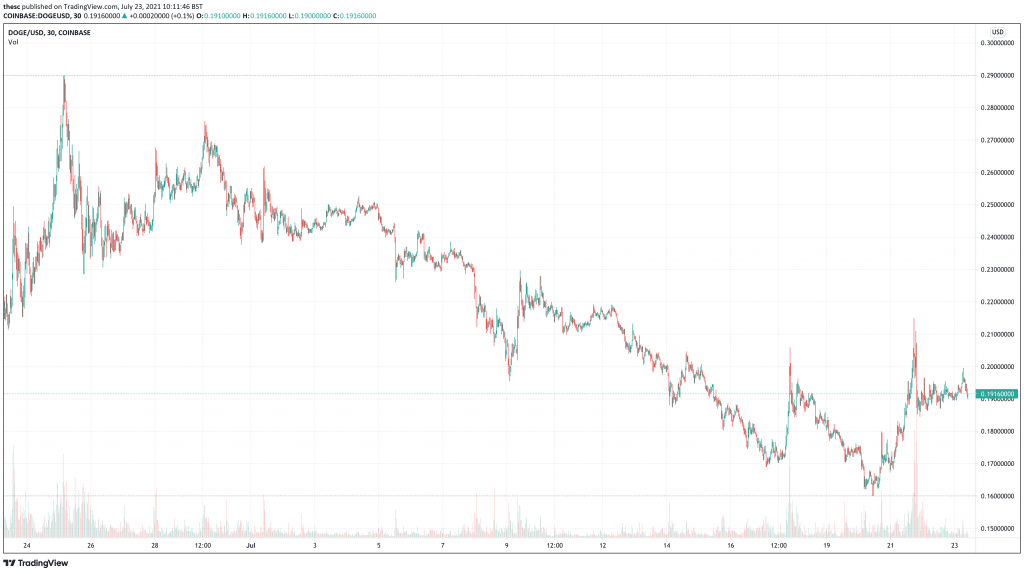 DOGE often has a tendency to bounce back strongly after falls, as the chart above illustrates. It’s also looking forward to a couple of big updates early next month. The first will add SegWit and Check Sequence Verify (CSV), which will improve scalability in differing ways. The second upgrade will reduce transactions fees, making DOGE more usable as a medium of transaction.

This could likely increase demand for dogecoin. And we could also expect the market to increasingly price in the value of these changes in the coming weeks.

There’s also the Dogecoin community, which is large enough in size to provoke isolated surges. The same goes for vocal Dogecoin supporter Elon Musk, who helped push DOGE back upwards this week by updating his Twitter profile pic to include ‘Dogecoin eyes.’ 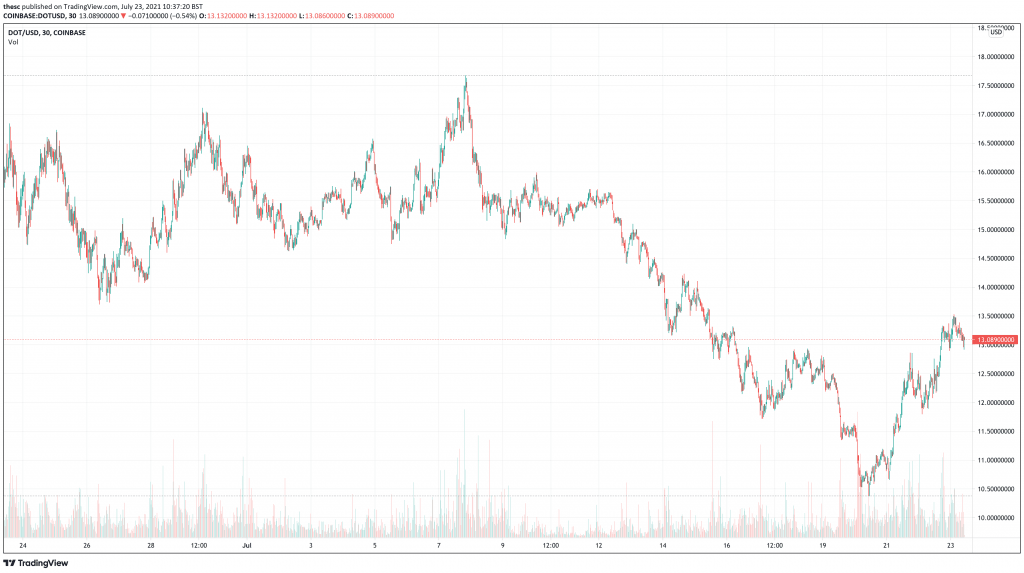 However, DOT’s poor recent performance sets it up to rally strongly. It has also performed relatively well during the recent bear market (compared to certain other coins), with its status as a proof-of-stake coin attracting institutional investors.

It is also in the process of rolling out parachains. These are basically side-chains which connect to the main Polkadot relay chain. This will enable the Polkadot platform to host a range of apps. In turn, it will increase demand for DOT, which is used to create parachains (and is also a governance token).

Polkadot’s parachains launch is expected to begin once two things have happened:
1. A full external audit is completed.
2. @kusamanetwork executes at least one successful auction involving crowdloans and hosting at least one functional parachain.
Read more from @gavofyork: https://t.co/m03AFJueXR