PARSIQ is a unique platform provides direct integrations among blockchains, data providers, and off-chain apps, aka the real world.

With PARSIQ the complexities are hidden, there’s no need to reinvent the wheel by building in-house tools that are easily accessed on PARSIQ.

In other words, real-time blockchain complex events, like chain branch reorganizations, block confirmations, gas fee data, and the specifics of different blockchains are easy to manage with Parsiq. Anyone can build and deploy blockchain to off-chain automation in minutes

Because of this easy-to-use ecosystem there is no requirement for specialist knowledge, which means anyone can get started linking blockchains to off-chain legacy systems and networks.

The crypto space must move beyond a narrowed, although valid, the perspective of network interoperability to one that establishes connectivity between this novel blockchain technology and the off-chain world it seeks to influence and transform. The liveness of the blockchain must not be wasted. 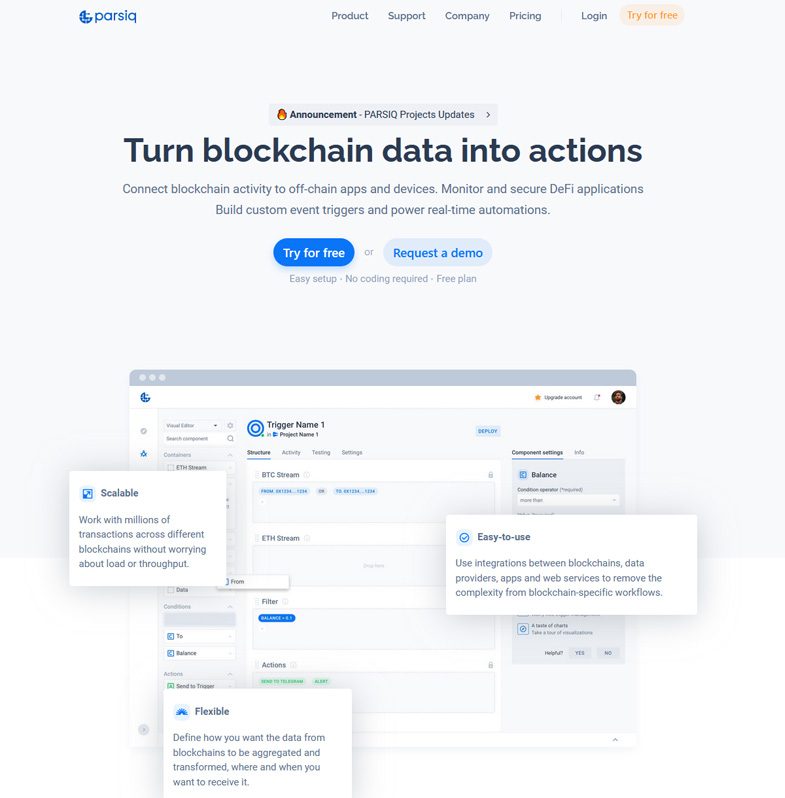 Who Should Consider Using PARSIQ?

PARSIQ’s breakthrough technology enables everyone and everything, be that individuals, enterprises or devices, to observe blockchain events in real-time.

This capability allows the off-chain consumption of those events by apps and devices, and as a result, said events trigger actions in any automated or semi-automated workflow environment. On a nutshell, the blockchain events hit the outside world

Another way of understanding this would be picturing the ‘static’ smart contract residing on blockchains similar to the way the internet currently works, where a user must click a button via a web browser in order to bring alive applications stored on centralized servers.

PARSIQ brings life to otherwise static smart contracts residing on blockchains waiting in vain for a ‘push’ or a ‘pull’ of interactivity.

We can imagine PARSIQ to be somehow the glue into the blockchain ecosystem so that the functionality of smart contracts can be fully utilized.

PARSIQ token (PRQ) went live in October 2019 raising €1.59 million precisely during the most recent crypto bear market. Later, Parsiq offered a full platform commercial release in May 2020. Currently, Series A fundraising round is ongoing (closes May 2021).

Parsiq’s core developers built a platform where absolutely anyone (coder or non-coder, individual, team or enterprise) can build and deploy blockchain to off-chain connections with just a few clicks or a few lines of code.

This simplicity relies on standardizing all chains into one easily consumable system for users to build blockchain to off-chain automation workflows.

Acting as a blockchain middleware, PARSIQ is a compelling solution for decentralized (and centralized blockchain) projects and companies to enable their applications.

As a universal blockchain to off-chain solution, PARSIQ sees not only major usage in the Web 3.0 emerging decentralized space, but also in the currently existing Web 2.0 space for companies that are starting to use blockchain as the underlying tech in the adoption phase.

The core developers of PARSIQ believe it can deliver value for clients, projects, users, and builders similar in scope to the value of the underlying decentralized networks (eg. Ethereum) themselves.

Saving money is the main reason why companies adopt the Parsiq system. By doing this, companies avoid investing in hardware infrastructure or node hosting; and replaces the need of developing non-scalable solutions.

This keeps companies safe from needing extra development in order to track blockchains in real-time.

As well as Ethereum’s Smart Contracts solve the problem of automation within a decentralized network, PARSIQ’s Smart Triggers (which are essentially blockchain to off-chain Smart Contracts) extend the functionality of Smart Contracts into the outside world.

Many companies/entities will need this critical piece of infrastructure to bridge all these networks and systems – and here is where PARSIQ is having its unique market opportunity.

Currently, PARSIQ is likely to become a critical piece of infrastructure for blockchains by interconnecting them.

Are there Alternatives to Parsiq?

PARSIQ’s offering is such that it has no direct competition which means it has a large addressable market defined by those seeking to leverage distributed ledger technology with the least friction and cost.

Other similar solutions like Polkadot and Chainlink are working at the level of spanning verticals so that blockchains can ‘talk’ to each other, but PARSIQ takes a different approach by solving interoperability at the user level.

So far, PARSIQ has no direct competitors.

There are many crypto projects doing various parts of what PARSIQ does, but none that do it all. In short, the PARSIQ technological approach is unique in the space.

The Graph is perhaps the closest competitor because it is also a blockchain data management and infrastructure project.

The Graph indexes transactions that have already happened and put them into a database. It then allows developers to query that data from the indexed database (i.e. pull historical data).

That is very different to PARSIQ’s approach which, by way of contrast, has visibility on all the activity taking place across different chains (including events that are not even visible from the blockchain directly) at the earliest possible level (mempool and confirmation levels) and allows for that data to be processed according to the coded logic (filter/map/compute/transform).

PARSIQ then pushes the information to the user in real-time in order to trigger off-chain actions.

The Graph and PARSIQ’s, therefore, take different technological approaches. Each has its own use cases. But processing live stream events is an approach that, coupled with data processing and robotic automation, is gaining serious momentum in IT and PARSIQ is doing this for blockchain.

In the paradigm that PARSIQ works in, it is positioned as the extension of protocols such as Ethereum, Solana and even infrastructure projects such as Chainlink.

With more than 45,000 registered users, more than 60,000 actively deployed Smart-Triggers, more than $25 billion worth of transactions processed, and more than 70 corporate partners/clients, Parsiq gained its pole position to become the middleware infrastructure of choice when connecting blockchain to real-world industrious processes.

How to Incorporate PARSIQ Into Your Business

From June 2021 the model will shift to on-chain subscriptions, where users must hold the PARSIQ token to access PARSIQ services and subscriptions, but with no fee for actually using the platform.

There will also be a circular economy of reusable inputs and outputs via a new Decentralized Finance (DeFi) product, the IQ Protocol, which will launch in June on mainnet following the recently announced testnet launch.

The IQ Protocol is a stand-alone product developed by PARSIQ and open to all, although PARSIQ will be the first project to use the Protocol. It creates an economic model, linking the PARSIQ Platform, the PRQ token and the Protocol. PARSIQ has eight projects lined up to utilize the Protocol, with more in the pipeline.

It will be open-source and decentralized, designed to tokenize models, whereby a token/asset is required to be held to access services and features.

Lenders will be able to earn passive income by lending the tokens into the IQ Protocol pool, while potential users can borrow or more accurately “rent” expirable versions of those tokens in order to access the platform and its features (without having to buy them from the market).

How to Get Started

Registering for an account on PARSIQ portal (portal.parsiq.net) requires only an email.

A simple Smart-Trigger contract can be set up and deployed extremely quickly, but more complex enterprise or corporate-grade solutions may take 30-60 minutes to deploy.

Small businesses, as well as personal users, have a Smart-Triggers interface intentionally simple, organized, and accessible. On the other hand, large businesses and enterprises are given a dedicated infrastruсture capable of being fully customized to their monitoring applications.

Choose how you want to be notified. PARSIQ can provide different delivery means based on your specific needs, from emails to refrigerator smart-screen notifications. Being these simple alerts, informative messages or raw data – you get to choose how you would like to receive your notifications.

If you are interested in testing it, you can run free trial versions or request a demo at https://www.parsiq.net/en/

The response from crypto participants has been very positive, which has helped to validate the leadership’s belief in the commercial opportunities it offers to those building new products and the final end-users of those products. Therefore product end-users will benefit from the improved quality made deliverable through leveraging PARSIQ’s platform advantages.

The project continues to make user experience improvements and to assess requests for additional integrations and features.

Please click here for the Full product roadmap for 2021.

The platform developers of PARSIQ will continue to innovate and provide improved capabilities in the future so that the blockchain is accessible to all, which is a great goal.