Naoris Protocol also introduces a new consensus mechanism called Distributed Proof of Security (dPoSec), which runs on a purpose-built blockchain that not only can record 50k-1M processes but also network state changes and general transactions per second.

In the new era of the internet, the conventional cybersecurity model clearly was not working effectively as cybercrime is increasing faster each year. Current cybersecurity models take an average of 197 days to detect a cyber breach, which even goes up to 12 months while you may not notice that you are being hacked.

Meanwhile, the majority of Web3 operates based on Web2 architecture that couldn’t handle the current level of cyber threat as blackhat hackers, rogue organizations, and nation-state actors have an arsenal of cyber weapons, which can easily exploit centralized network architectures.

For over 35 years, there were no changes to black boxes owned and operated by centralized vendors.

Promised to revolutionize how security is approached, considered, and implemented, Naoris Protocol operates using a new sharding-like architecture called Verge Clusters, which carries case-specific security and compliance logic to the integrity of all networks, devices, and processes that uses the protocol.

Take advantage of decentralization to increase the security of your network with every device you add. As devices validate each other within a tokenized machine economy, single points of failure are eliminated and a trusted communication layer is established among devices in real-time.

The Naoris Protocol not only enables a cybersecure environment for Web2 and Web3 but also provides value to nation-states, governance structures, and industries.

It’s built for everyone without competing with existing L1 and L2 solutions. Blockchain projects can adopt Naoris Protocol to avoid inheriting Web2 CyberSecurity risks, and to enhance the integrity of their own validators and nodes.

In addition, the protocol is community-governed, censorship-resistant, and changes the game in CyberSecurity aiming to reduce a $10T cybersecurity problem in the world. 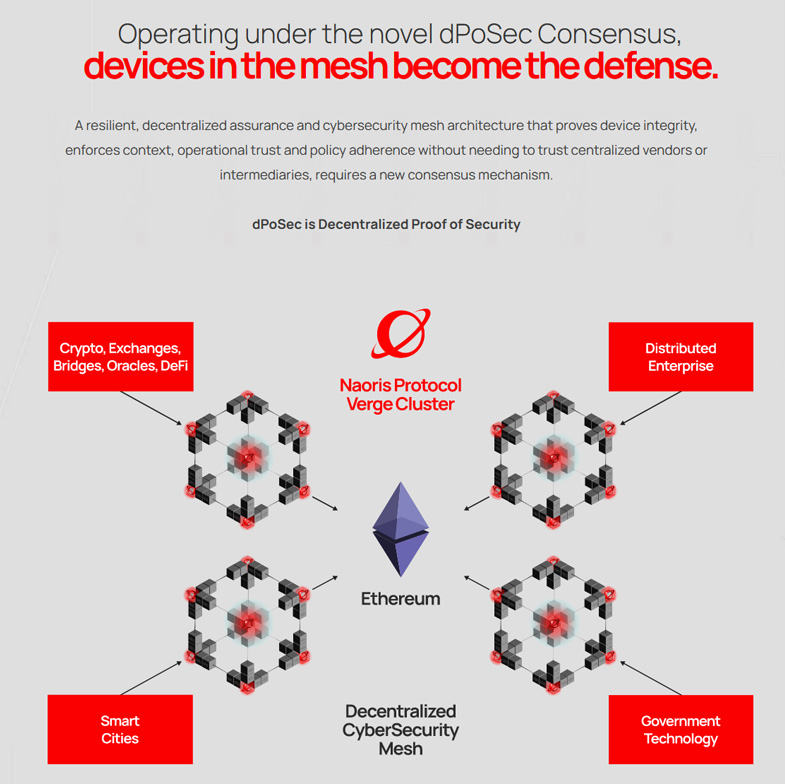 According to Gartner, Cybersecurity Mesh is a top strategic technology trend for 2022. It is a flexible, composable architecture enabling best-of-breed, stand-alone security solutions to work together to improve overall security.

Also, cybersecurity mesh can also quickly and reliably verify identity, context, and policy adherence across both cloud and non-cloud environments.

While traditional, fragmented security approaches focused on enterprise perimeters that leave organizations open to breaches, a cybersecurity mesh architecture provides a composable approach to security, based on identity to create a scalable and interoperable service.

As a result, its structure secures all assets, regardless of location, and becomes a security approach that extends across IT services. 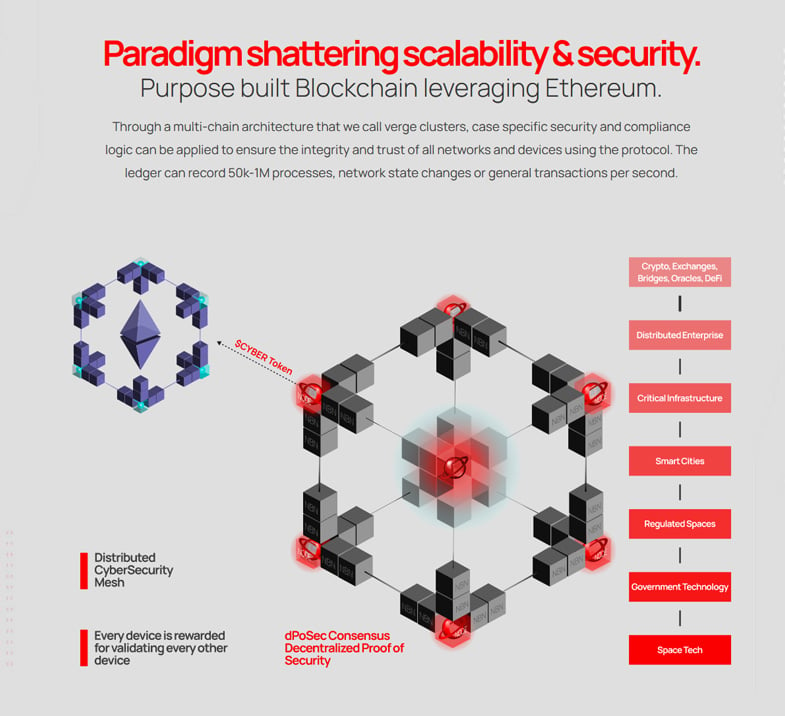 Not only that, but these are also supported by Bayesian-based learning to detect something unusual.

As a result, these practices are to be followed and when systems are out of whack they are alarmed for risks coming from simple tasks being forgotten or not enforced somewhere, like 2FA, or vulnerabilities not patched.

Every device will continually validate every other device bringing trust to all devices, and securing the baseline layer. This also helps to reduce risk from all other aspects of the network and operational processes in a P2P format.

Every device acts as a watchdog for every other device making them act in synchronous harmony, therefore, this will create a distributed supercomputer of trust.

The $CYBER token is a core of the protocol acting as a true machine-to-machine economy transaction model to validate CyberSecurity and trust status of devices through transactions, validated under dPoSec consensus.

$CYBER token monetizes trusted cyber-secure systems over a function of time, using the dPoSec consensus as an enabler and incentive to achieve cyber-secure networks.

The token requires networks to integrate Naoris Protocol and hold tokens to incentivize validators to continually validate the trust status of its underlying devices that power the network in case of a breach or a threat. 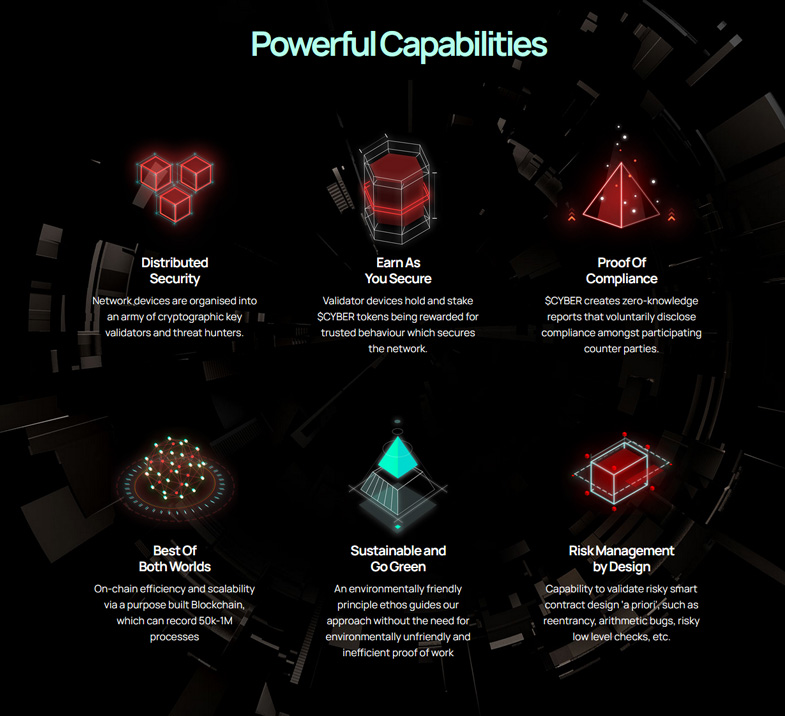 Then, centralized and untrusted devices are converted into cyber trusted validators after an onboarding process to ensure they have no known risks or vulnerabilities present and can be added to the secure baseline of potential validators with every device validating every other device for trusted behavior.

As mentioned, all within a block time lower than 1 second under the dPoSec consensus.

There is currently no value in cybersecurity over time, therefore, using Naoris Protocol makes networks grow stronger and more valuable as they grow or become more complex.

As such, the $CYBER token acts as fuel for the whole ecosystem.

Validator devices will hold and stake $CYBER that also contributes to a secure and trusted growing environment. Validator devices are also rewarded over time for trusted behavior, uptime stability, and cyber-trust.

Meanwhile, Web2 and Web3 participants will be able to earn $CYBER staking rewards by sharing new intelligence related to new threats and for securing the network, purchasing $CYBER will fuel the validation of devices and networks with rewards.

Additionally, they also gain from the growing monetization of cybersecurity data through trust validations.

The Future of Security?

Naoris Protocol is unique because it is a complimentary security layer that does not conflict with any other traditional or centralized cyber tool. It provides access to a global threat mitigation environment, where every participant benefits ranging from individuals to global organizations.

Using Swarm AI and Blockchain technology to convert traditionally untrusted devices and centralized networks into a Decentralized CyberSecurity Mesh of cyber-trusted validator nodes, the protocol protects every networked device in the digital world from cyber threats and associated risks.

The post Naoris Protocol: The Future of Decentralized CyberSecurity appeared first on Blockonomi.