Blockchain gaming has disrupted the gaming and recreational entertainment industry, bringing a rewarding mechanism that entices players. Play-to-earn games are beginning to take center stage in the crypto space, and the hype around them is truly breathtaking. Some game communities’ populations on social media are already over 200,000 strong, months before the beta release, underlining gamers’ anticipation towards these projects.

All the hype is not in vain, though, as games like The Sandbox, MOBOX, DeFi Kingdoms, and the most prominent, Axie Infinity, have witnessed massive participation in recent months. Little wonder why CryptoTanks hopes to outdo all of its predecessors and take the blockchain gaming industry by storm.

The 1980s witnessed the 8-bit game trends, with popular consoles like Gameboy featuring many 2D pixel-style games. CryptoTanks is a play to earn NFT game that takes its users–if they are of the ’80s generation–back to one of the popular 8-bit games released in 1985, Battle City. Battle City involved tanks, walls, enemy tanks, and player bases. CryptoTanks incorporates all these features, with fantastic new locations, more missions, and the most exciting opportunities to earn real cryptocurrencies while playing, even if the player loses the game.

Based on the ETH/Polygon chain, CryptoTanks infused gaming, yield farming, and NFTs to give players a wholesome crypto experience straight out of Battle City. The game will be released for Android and iOS and is free to download. Follow all of the team’s updates on CryptoTanks’ socials: Twitter, Telegram, and Discord.

In the game ecosystem, $TANK is the reward and governance token. With a total supply of 100 million, the $TANK token is poised to become even more valuable as the CryptoTanks ecosystem expands. The in-game currency is $TANK, and players will use $TANK to buy tanks, ammunition, and fuel and upgrade Tank NFTs. Players can also earn $TANK when they stake $TANK in the farming pools or LP tokens of TANK/ETH. For playing, gamers earn $TANK, which they can sell on exchanges.

All in-game assets in CryptoTanks are NFTs. The Tank NFTs are of three types in terms of rarity: Common, Rare, and Legendary. Each Tank has impressive features like colors, chassis, armor, and gun. Every time a tank NFT is traded on the marketplace, there will be a 3% fee which will be burned. Furthermore, the burn mechanism will also apply to the shop where users can upgrade or buy addons to their Tanks. This will make the token deflationary. Future updates will have Map NFTs, which represent a unique game experience, landscape, and obstacles. Players have full ownership of their assets and can trade them or put them up for rent to earn a commission. 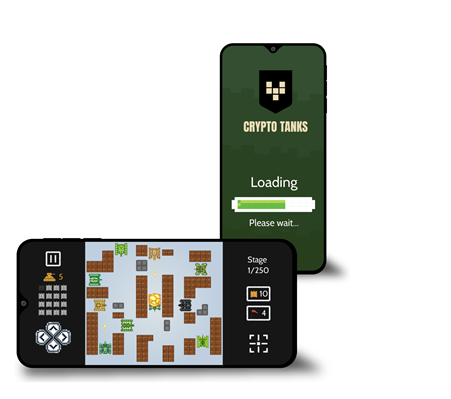 The two playing modes, One Against All and Teamplay, offer another dimension to the gameplay. One Against All rewards the last Tank standing, while Teamplay pits two teams of players against one another.

How does CryptoTanks reward its players?

On CryptoTanks, players get rewarded for their skills, stakes, quality of their Tank NFTs, and even their game time.

The CryptoTanks team has a lot in store, in terms of updates, for the community. The public sale of the $TANK token is coming soon, and you can join the waitlist here. Also, check the roadmap for other expected announcements