Bitcoin price has gained over 1.5% over the last 24 hours as bulls strive to recover the losses triggered by the market’s knee-jerk reaction to China’s crackdown on last week. This suggests that the BTC investors have absorbed the news as others take the chance to buy Bitcoin on the dip’.

Bitcoin’s strong stance is also fuelled by the news that El Salvador,  the Latin American country that has legalised the use of Bitcoin (BTC) as legal tender, has now ventured into Bitcoin mining.

In June the President of El Salvador Nayib Bukele said that the country would be miming Bitcoin using geothermal energy from a volcano. Although many people doubted his plans then, he seems determined to bring them to fruition.

On Tuesday, the president shared a video on twitter showing what appears to be the installation of Bitcoin mining machines inside a geothermal electricity generation plant.

Bukele’s tagline was a short and mysterious “First Steps”: 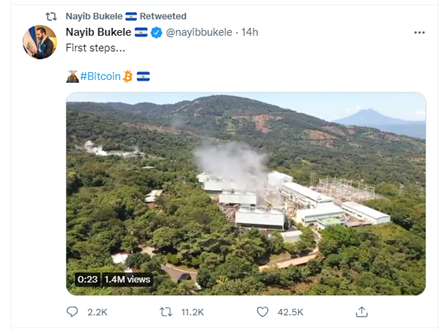 This is good news for crypto advocates because in just a short period of time, El Salvador has legalised the use of Bitcoin, provided the Chivo Wallet, and built the Chivo ATMs and Cashpoints. Now, the country is mining the most difficult crypto asset with the most renewable and cleanest energy.

This among other fundamentals such as continued cryptocurrency adoption such as Switzerland approving the first cryptocurrency fund is expected to propel BTC higher.

“The Swiss Financial Market Supervisory Authority FINMA has approved the first crypto fund according to Swiss law. The fund, which is restricted to qualified investors, invests primarily in so-called cryptoassets.”

Such positive industry news are expected to propel Bitcoin price to gain momentum over the next few days.

At the time of writing, Bitcoin (BTC) is trading at  $42,367 on most crypto trading platforms with a bullish bias and appears to be battling immediate resistance provided by the $43,000 psychological level.

On the flip side, if the bellwether cryptocurrency favours the bears, the Bitcoin (BTC) price may fall below the immediate support around $41,495 embraced by the 100-day SMA. If this happens, Bitcoin will fall towards the $38,493 support wall.