ABEY has emerged as the Blockchain Solution of the Year winner at the AIBC Europe 2021 summit in Malta. This achievement caps an impressive year in which the blockchain protocol has launched several products and increased its userbase by over 500%.

ABEY was one of the event’s key highlights and nominated in two categories for the Blockchain Solution of the Year and DeFi Project of the Year in recognition for its exploits in 2021.

The award process involved a combination of popular votes on the AIBC Summit website and a panel of judges with expertise in blockchain technology, usage and the global developer community. ABEY passed the criteria and won the Blockchain Solution of the Year. 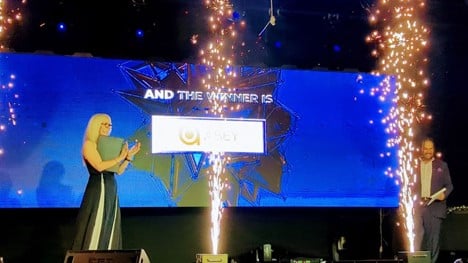 Phillip Sauerborn, co-founder and Director of ABEY Foundation expressed his delight and stated” “This victory is a significant milestone for our developers and the thousands of users who make up the ABEY ecosystem,”, “This prestigious recognition is the result of countless hours of hard work from our ABEY team and the developers running their apps on our blockchain.

Eman Pulis, group founder of AIBC, stated that ABEY was a deserving winner and praised the innovative blockchain protocol. “the award was a great one for ABEY. Every developer running their dApps on ABEYCHAIN, every user of ABEY’s XSwap.com DEX, every holder of ABEY cryptocurrency should feel proud of your achievement.”

For those that have been following the progress of ABEY in the past few months, this latest achievement should not come as a surprise. ABEY has been able to achieve significant inroads with its highly scalable blockchain ABEYCHAIN.

ABEYCHAIN is regarded as one of the hottest prospects in the blockchain world and uses a hybrid consensus architecture that ensures scalability, decentralization and security. It is capable of achieving high speeds of 10,000 TPS, and many developers and projects have jumped on board to create innovative decentralized solutions.

In November, ABEY launched its decentralized exchange XSWAP to rave reviews within the crypto world. So far, it has surpassed expectations and, within the first week of the launch, had hit a TVL of $60 million and is currently over $75 million in total value.

The success of XSWAP could be attributed to its unique architecture that uses a new trading model to maintain liquidity and its innovative automated market maker (AMM) model. It is also compatible with external assets, and users can swap Bitcoin, Ethereum, DOT, XT tokens and other coins on the exchange.

ABEY has also been active in fostering the adoption of the ABEY token. ABEY token was recently listed on crypto exchange Liquid Global, with over 3 million users in 100 countries. More people can now exchange their coins and fiat for ABEY tokens within minutes and participate in other Liquid Global trading features.

Unsurprisingly these developments have impacted the ABEYCHAIN blockchain, which has averaged 10,000 new addresses since August 2021. At the time of writing, ABEYCHAIN has more than 140,000 wallet addresses on its blockchain. However, the future is exciting, and ABEY has more product launches in the pipeline that will expand its ecosystem.

To learn more about ABEY and ABEYCHAIN, please visit the following links.

The post Abey Named Blockchain Solution Of The Year At AIBC Submit 2021 appeared first on Blockonomi.