The Bitcoin Mining Council (BMC) has been birthed and it could be good news for crypto. Although we are all getting collectively tired of the Elon Musk crypto show we are where we are – the joker will not be put back in the box, so his tweet revealing the founding of the Bitcoin Mining Council should be welcomed, although ‘maximalists’ see it as an attack on bitcoin decentralisation.

Here’s what Musk wrote: “Spoke with North American Bitcoin miners. They committed to publish current & planned renewable usage & to ask miners WW to do so. Potentially promising.” (WW in this context means worldwide)

Will billionaires wreck bitcoin or is BMC good news?

That the price rallied on his latest pronouncement certainly speaks to the continued unhealthy overweight influence of Musk, but let’s leave that aside for now. And it should be noted that his words weren’t enough to push the bitcoin price past $40k resistance, but bulls may see opportunities in the ‘green’ news narrative possibly flipping to the positive.

And even if your portfolio is bleeding red after Musk’s recent interventions, it should probably be admitted to that the issue of bitcoin’s lack of green credentials is, to put it mildly, something that is a matter of legitimate concern.

Therefore any attempt to seriously engage in order to overcome bitcoin’s lack of sustainability credentials – real or imagined (Jack Dorsey’s Square has issued a report arguing that bitcoin will incentivise renewables adoption in the world) – is more bullish than not. 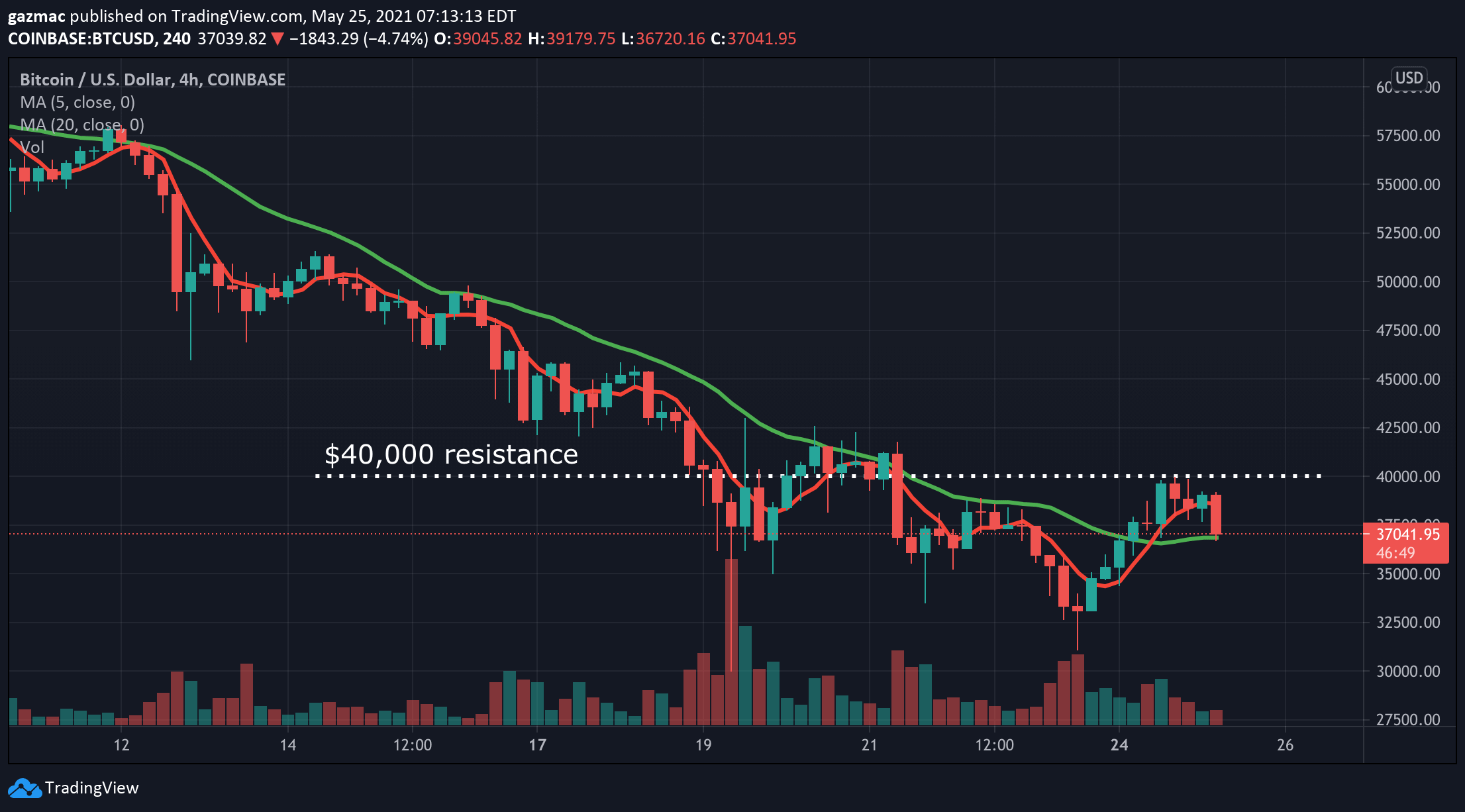 Here are the 5 reasons why the formation of Bitcoin Mining Council could be bullish for the bitcoin price.

The idea that the rest of the crypto industry will be just fine without proof of stake based blockchains is problematic, at least in the short term. If bitcoin crashes, as we have just seen, then the rest of the market will follow.

At one level – the fundamental level – market gyrations shouldn’t matter, but there comes a point when the funds flowing into the industry for investment in product stalls and the value locked up in the industry in ‘crypto-money form’ loses its value, then those elements can come together to set back broader development.

Bitcoin is notoriously difficult to upgrade, as those of you who were around for SegWit will know. From the standpoint of the network’s solidity (see what I did there), this may be an advantage, in that there is no possibility – beyond at the theoretical level – of the supply cap of 21 million being disturbed, for example.

Indeed, the difficulties in upgrading the technology because of an inability to arrive at consensus (and did you see what I did there too) among the various stakeholders – devs, miners, ecosystem companies). With heavyweights such as Tesla and MicroStrategy and western mining outfits such as Argo Blockchain joining the council today, it could provide the impetus to restart serious technological development on bitcoin, beyond the tweaks represented by Taproot and Schnorr.

The Bitcoin Mining Council is indicative or a serious commitment to addressing bitcoin’s green problem, even if it is only at this stage a question of transparency in energy sourcing from renewables. There are problems with the idea of auditing energy usage from a grid based on a fungible material such as energy once the raw material input has been used up and transformed into electricity or the inputs for renewables are taken into account.

But leaving those issues aside, the auditing of the balance between renewable and fossil fuel sources of energy going into bitcoin mining, can insulate certain miners and the bitcoins they mint.

Although there is a widespread misconception that bitcoin is anonymous, this is not really the case. First off, if an address is associated with a real world identity then the flows emanating from that address can be tracked. Furthermore, bitcoins are not in fact as fungible as they might at first glance be assumed to be.

A bitcoin minted by Argo Blockchain, for example, is associated not just with the block in which it was first minted but with the digital signature used to sign the coinbase transaction and the original unspent transaction output (UTXO). Admittedly most transaction will be composed of many UTXOs brought together, making the job of tracking “individual” bitcoins technically complicated, it is not impossible. In the near-future, some bitcoins could become more equal than others.

4. ESG is big in investment, so renewables transparency will be good for institutional inflows

Environmental social and governance (ESG) theme is currently the biggest trend in investment management. For a number of years fund data firms such as Morningstar has included ESG in their scoring system for financial products. According to David Grider,  a strategist at Fundstrat “‘greener’ bodes well for ESG narrative and institutional adoption”. He may well be right. There is a lot of money sloshing around looking for an ESG home. Up until now that money would not have found its way into bitcoin, although investors who hold Tesla now also indirectly hold bitcoin.

According to Morningstar $51.1 billion of net new money flowed into US funds aline in 2020 — and that market the fifth consecutive annual record. There’s no reason to expect the pace not to quicken in 2021.

In another sign of crypto getting its ‘change the narrative’ act together, the Crypto Climate Accord is rapidly amassing signators, as crypto firms seek to burnish their commitment to fighting climate change. The accord signatories pledge to work towards making crypto carbon neutral by 2030. Many of the great and the good of crypto are supporting the accord, from CoinShares and Consensys to Hut8 and Ripple.

5. Ringfencing and boosting ‘green miners’ in the West

Although the data can be misleading as it depends on where you start counting from, various reports have claimed in recent years that the majority of the mining activity in the West is undertaken with renewable energy, in particular hydro electricity.

Admittedly the footprint of western-based miners is small compared to China, which accounts for around 65% of hashrate, according to 2020 data from Statista. By comparison the US weighs in at around 7%, which is not insignificant, but Canada and Norway, where hydro is big in mining, the percentage of the total hashpower operating on the network is tiny at 0.8% and 0.5% respectively.

Russia and Kazakhstan both command 6% of hashrate, leveraging their cheap energy supply, with Iran doing the same, enjoying 3% of hashrate. The more hashrate there is on the Bitcoin network, the more secure it is.

But if Chinese miners start to go dark under pressure from the government, then the slack will be taken up elsewhere as the difficulty mechanism kicks in, falling as overall hashpower initially falls, and that could be an opportunity for US miners, especially if backed by funds attracted to western mining companies such as publicly listed Argo Blockchain and Riot Blockchain.